Is the U.S. economy on course for one of the strongest years in recent history?

June 1, 2021 – Sixteen months ago, when news of a virus outbreak in China was first reported, our U.S. economic forecast was still penciled in at 2-2.5 percent annualized GDP growth for the next few quarters of 2020, continuing a pattern of modest growth in the latter half of 2019. Then, on February 3rd, the Trump administration declared a public health emergency in the United States. In the days, weeks and months that followed, the news went from bad to worse to catastrophic in terms of both the epidemiological crisis and the economic shock. The gravity of what was unfolding became apparent as financial markets grew more and more volatile and U.S. financial conditions began to tighten significantly.

After all was said and done, the economy had contracted by 31.4 percent on an annualized basis in Q2—the largest single quarter of contraction on record— and 22.3 million individuals had lost their jobs.¹ The economic data coming in was record-shattering, with record high unemployment rates and record declines in retail sales, nominal consumer spending, manufacturing output, and so on. The shock to the U.S. economy and the series of public policy responses that followed dramatically altered the economic landscape and put the U.S. economy on course for what is likely to be one of the strongest years in recent history this year.

Where things stand today and the outlook for the future

The outlook for the economy has brightened in recent months. The U.S. is now vaccinating more than 2 million individuals per day and states are beginning to remove many of the restrictions that were important to combating the virus, but also slowed economic activity in many cases.² Increased mobility across the U.S. is helping to support both stronger job growth and, by extension, more robust economic activity.

When will we see a full recovery? (number of months to return to pre-recession peak) 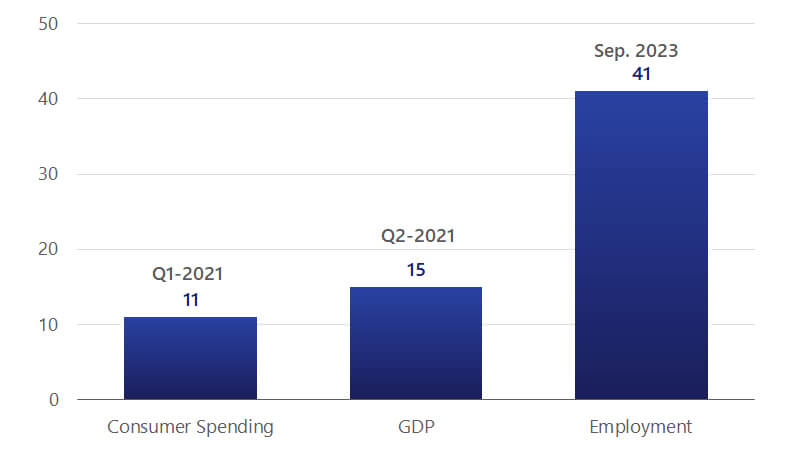 Our forecast for real GDP growth this year is 5.6 percent year-over-year (YoY) following a 3.5 percent contraction in economic growth last year. Nominal consumer spending is expected to rise 10.3 percent this year both due to higher inflation pressures and stronger real spending. The multiple rounds of stimulus are expected to help lift government spending this year as well. In total, we now see a full recovery in aggregate macroeconomic health measures such as total consumer spending and GDP growth occurring this year.

One aspect of the U.S. economy that is expected to take longer to recover is the labor market. As of the April employment report, the U.S. economy had 8.2 million fewer jobs than before the recession began last March.³ More importantly, the job losses were very uneven across industries, income, and demographic groups.

While every major industry category lost jobs during the recession, the hardest hit industry by far was the leisure and hospitality sector. As of April, the industry still had 2.8 million fewer jobs than it did in January 2020. Given the disproportional impact on leisure and hospitality, which has an average hourly wage 42 percent below the U.S. average, there is also clear evidence that those impacted by layoffs were lower-income individuals.

While the U.S. economy overall will recover this year, the unevenness of the labor market recovery will leave scars on the groups hardest hit for several more quarters.We expect monetary and fiscal policy to remain accommodative well into the expansion phase of this economic cycle. Even with such continued support, risks remain to the outlook. The most significant risk is the uncertainty around the effectiveness of thevaccine against new variants of COVID-19. Should case counts rise to a point that further restrictions are needed, there could be a material negative impact to the outlook for economic growth. The eventual removal of some of the fiscal support could also pose a risk to the recovery. As the mortgage forbearance programs end and student loan payments resume before some of the hard-hit demographics are back to work, there could be a pickup in credit defaults later this year. The risks however are not all skewed to the downside. Should hiring activity and consumer spending rebound faster than we expect, growth could easily exceed our current forecast for this year and lead to a much more even rebound in job growth.