U.S. consumer spending at clothing stores has declined 0.5 percent over the past year (August 2016 to July 2017) relative to the previous 12-month period, according to the Visa Retail Spending Monitor, which reports spending on all forms of payment. More recently, however, the downward trend in clothing has worsened—with store sales declining 1.8 percent since the start of the year (January-July 2017, year-over-year). While most sub-categories mirrored this trend (see biggest sub-categories in chart below), jewelry posted 6.7 percent year-over-year (YoY) growth during the same period, and 3.2 percent growth in July alone.

Industry leaders reportedly expect record retail store closings this year, adding downward pressure to sales. Similarly, low inflation is hitting clothing stores hard. In the last year, inflation was up just 0.1 percent for clothing, compared to 1.9 percent for all items. This trend could be due partly to price competition from online-only retailers, which benefit from consumers’ growing preference for purchasing clothes through the digital channel. According to a recent survey,* 28 percent of consumers said they would likely buy apparel on a mobile device, while shoe purchases (23 percent of consumers) and accessories (20 percent) were strong enticements to the mobile channel as well. 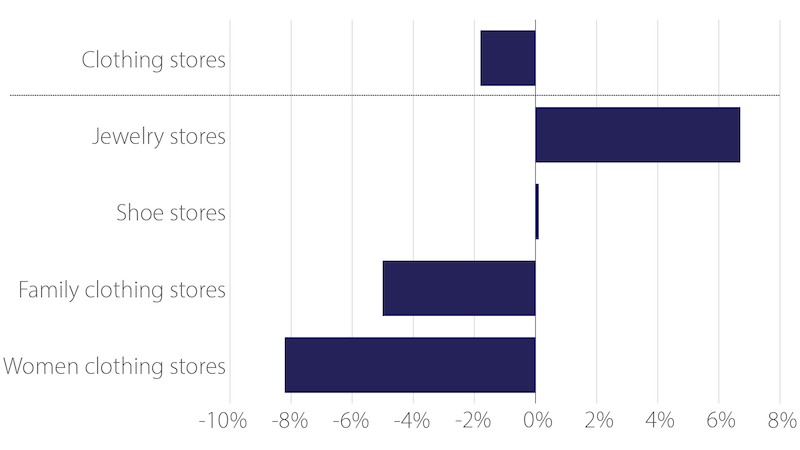 While inflation in the apparel spending sector has been low nationwide over the past year, it was especially strong in jewelry, which posted 4.4 percent inflation growth over the same period. High consumer confidence also contributed to growing jewelry sales: consumers have more cushion to spend on luxury goods. On a regional level, however, jewelry spending varies—and demographics may explain a part of it. Growth in jewelry sales is more than 5 percent in states such as California, Vermont, and New Hampshire, where the median age that women get married is 27—which is also the U.S. median age of a millennial woman currently. However, jewelry sales are declining in states such as Nebraska, West Virginia and Alaska. The median age that women get married in these states is 26, meaning millennial women there likely already married last year. Millennial women tying the knot does not fully explain the regional variation in jewelry spending, but is a curious twist to the trend as a possible contributing factor. 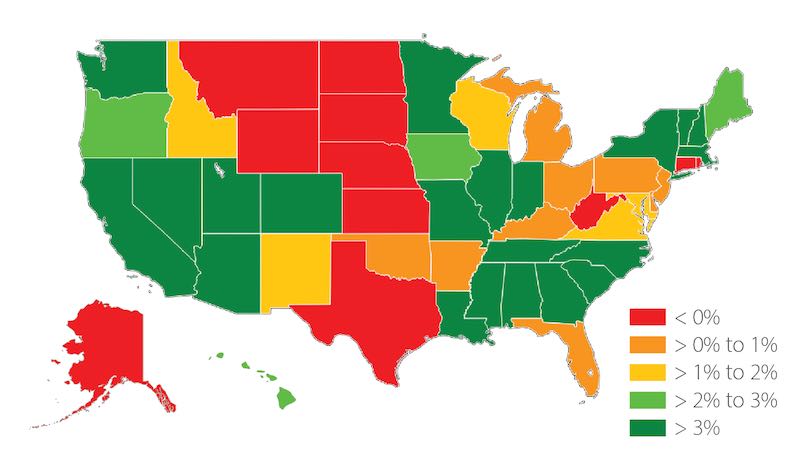