Retail sales jump to near pre-pandemic levels in September.

November 10, 2020 — Retail sales (excluding auto sales) rose 1.5 percentage points from August’s level of sales and are now 4 percent above last year’s September levels. This year-over-year (YoY) growth was just 0.12 percentage points lower than in February of this year, as back to school, home improvement, and furniture sales provided a much-needed boost to September retail sales. Wage and salary growth improved across sectors in August. However, unemployment claims remained high in August as federal unemployment boost payments were cut in half, which reduced disposable income growth by 4.1 percentage points from July to August. The savings rate declined to 14.1 percent of disposable income in August as a result of the reduction in federal assistance and recovering retail sales.

Consumer prices rose for the third consecutive month, finishing September at 1.4 percent on a YoY basis. Overall consumer confidence was revised upward from 84.8 to 86.3 in August. In September, consumer confidence jumped 15.5 points, finishing above 100 for the first time since March. While August’s job gain was revised up to 1.49 million from the originally reported 1.37 million jobs, there were only 661,000 new jobs added in September. This was less than half of the jobs added in any month since the recovery began in May. The labor market remains 10.7 million jobs below the pre-COVID peak in February. The unemployment rate decreased 0.5 percentage points in September, finishing the month at 7.9 percent.

"The September bounce in retail sales along with a higher consumer confidence reading was welcome news on the health of consumers,” said Michael Brown, Principal U.S. Economist. “Personal spending remains soft, however, as most consumers spend on goods rather than services. The recovery in overall consumer spending continues to be gradual."

"Rising consumer prices and confidence in September provided a positive indication that the consumer continues to recover following the recession,” said Travis Clark, Associate U.S. Economist. “Job growth continued to slow in September, a trend that could threaten the strength of the recovery and consumer spending." 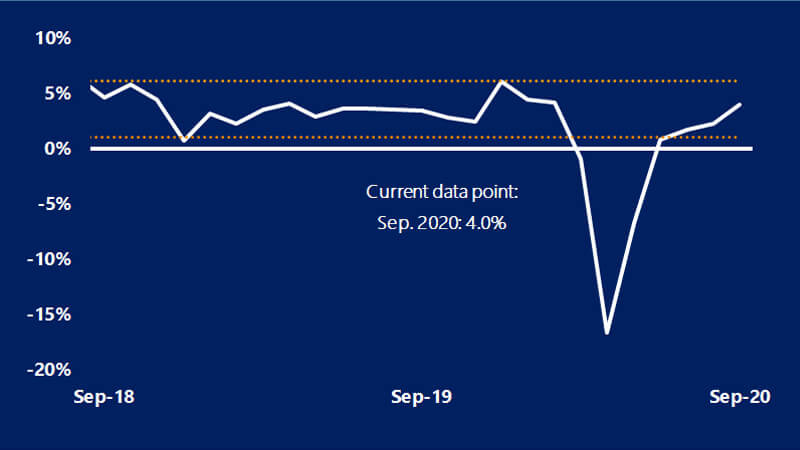 A line chart showing the YoY percent change of retail sales (excluding auto sales) between September 2018, when sales topped 6.2%, and September of this year, at 4%, after climbing back in recent months from a sharp decline of -16.64 in Apr-2020. There are two dotted orange lines that represent the normal range for the prior expansion, defined as one standard deviation above and below the average change from July 2009 to February 2020.