October retail sales data pointed to a downshift in the pace of consumer spending.

Stimulus effects continued to support nominal disposable income growth, which rose 6.9 percent above last year’s level. The all-important wage and salary component returned to positive territory for the first time since the trough of the recession in April, rising 0.5 percent YoY. The saving rate remained elevated, at 14.3 percent.

Nominal consumer spending accelerated again in September, rising 1.4 percent from the prior month. Nominal spending continued to slowly inch towards recovery, with total spending down 0.6 percent on a YoY basis. The recovery in consumer spending remained unequal across spending categories—goods purchases were up 8.2 percent YoY verses services spending, which remained down (4.6 percent) relative to last year’s levels.

“After a strong September, consumer price growth, consumer confidence, and job growth all took a slight step backward in October,” said Travis Clark, Associate U.S. Economist. “New spikes in COVID cases and the lack of a new stimulus package have impeded the rebound in confidence.” 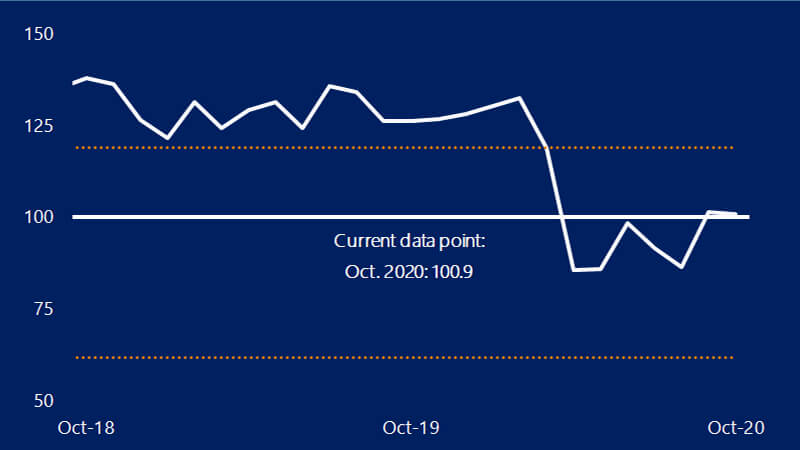 There are two horizontal orange lines in both the retail sales and Consumer Confidence images that represent the normal range of each measure for the prior expansion, defined as one standard deviation above and below the average change from July 2009 to February 2020.

Sources: Visa Business and Economic Insights, U.S. Department of Commerce and Conference Board

After three consecutive months of consumer prices rising on a YoY basis, consumer price growth slowed to 1.2 percent YoY from 1.4 percent in September. Used cars and trucks had the highest level of growth of all spending categories on a YoY basis for the second consecutive month, increasing 11.5 percent from last year. Consumer confidence was revised slightly downward, from 101.9 to 101.3 in September. October’s confidence reading fell slightly to 100.9. Future expectations fell 4.5 points from September, while consumers’ view of the present situation rose 5.7 points. While most income groups reported an increase in confidence, households making under $15,000 had a 26.1 point drop month-over-month (MoM) in October as negotiations over a second stimulus bill faltered.

September’s job gains were revised up to 672,000 from the originally reported 661,000 jobs, which made October’s job gains of 638,000 a deceleration in job growth of 44,000 MoM. New spikes in COVID cases and airline layoffs slowed net hiring and have left the labor market 10.1 million jobs below the pre-COVID peak in February. The unemployment rate decreased 1 percentage point in October, finishing the month at 6.9 percent.