September 24, 2020 – Retail sales (excluding auto sales) rose 0.7 percent from July’s level of sales and now stands 2.1 percent above last year’s levels. The closely-watched control group (which feeds into the calculation of GDP growth) fell for the first time since April, indicating the consumer recovery may be losing steam.

An improvement in wage and salary growth, along with continued federal economic recovery payments, helped drive growth in personal disposable income, which rose 9.5 percent from last July’s level. The manufacturing sector had the strongest wage and salary gains, underscoring the sector’s rebound. The saving rate remained elevated at 17.8 percent of disposable income. This is well off its high of 33.7 percent in April as the wide-spread shelter-in-place orders dramatically reduced consumer spending.

Overall consumer confidence fell for a second straight month, dropping 6.9 points from July. Confidence in current business and labor market conditions fell 11.7 points from last month to 84.2, while future expectations fell just 3.7 points to 85.2 in the same period. Confidence fell across all age ranges for the second consecutive month, with those under 35 experiencing the largest drop in confidence since July.

“Retail sales (ex-autos) have now returned to their long-run average growth rate, which is a positive sign the economic recovery continues,” said Michael Brown, Principal U.S. Economist. “However, this trend masks some underlying softness that has emerged in recent months. Overall consumer spending remains well below its pre-recession peak.”

The pace of job growth slowed once again as firms continued to be cautious on the economic outlook,” said Travis Clark, Assoc. U.S. Economist. “While price growth has shown consistent improvement since June, a slowly recovering labor market and a spike in COVID cases in July have put a dent in consumer confidence.” 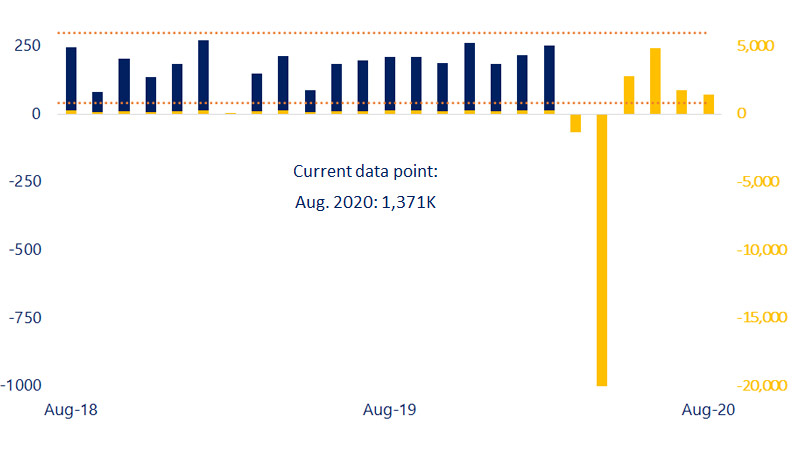 *The orange lines represent the normal range for the prior expansion, defined as one standard deviation above and below the average change from July 2009 to February 2020. March-August job numbers shown on orange axis (right) due to the dramatic changes in those months.