Consumers may see a brighter 2022 on the horizon

Consumers seem to be headed into 2022 with a positive outlook for the coming year.

January 2022 – The Conference Board Consumer Confidence Index increased to 115.8 points in December, suggesting consumers headed into 2022 with a positive outlook for the coming year.

The future expectations component of the index increased by nearly seven points, while the present situation component remained flat, decreasing by just 0.3 points to 144.1 and still struggling to get back to pre-pandemic levels. Consumers’ impressions of current business conditions were “less negative.” The differential—the percentage of consumers who view the category positively minus those who see it negatively—was -6.9 percent, up from -9.4 percent in November.

This was also reflected in impressions of the present labor market, with a more than 42 percent differential of those viewing jobs currently “plentiful,” down slightly from November’s reading but remaining close to historical highs. More consumers saw business conditions improving in the following six months, while fewer expected them to worsen. The differential improved to +8.8 percent, which bodes well for consumer momentum entering the new year. Income expectations—a strong indicator of consumer spending—remained strong with a positive differential of 6.5 percent.¹ 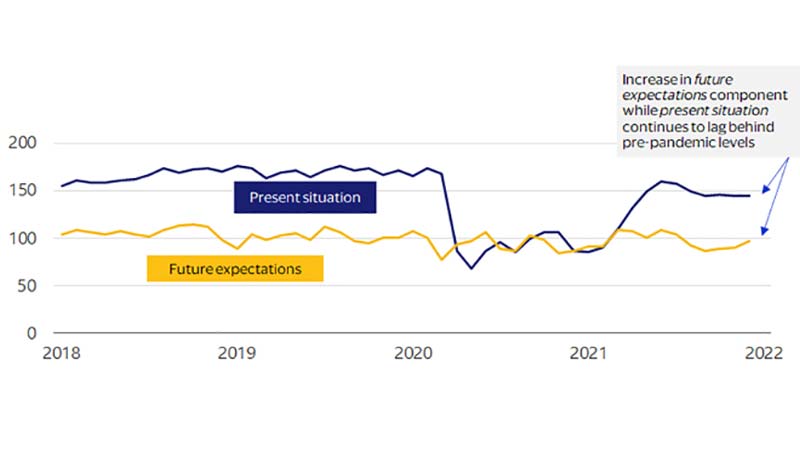 Consumers’ assessment of the present economic situation held steady as inflation concerns declined from a recent 13-year high. Twelve-month expectations for inflation decreased to 6.9 percent in December, down from 7.3 percent in November.

As a result, plans for durable-goods purchases, such as cars and homes, increased in December. Consumers’ current assessment of the labor market held strong—with 42.6 percent more consumers seeing jobs as “plentiful” relative to those who saw them as “hard to get.” However, consumers’ expectations for future labor market conditions improved markedly, with 10.3 percent more consumers speculating there will be more jobs in the coming six months than those who believe there will be fewer.

This differential increased from 3.8 percent more in November and is a solid indication of confidence moving into 2022. The possibility of continued increases in gas prices may loom as a larger influence on consumer confidence in the coming months. With the potential for more consumers returning to commuting in 2022, gas purchases could once again become a larger portion of consumers’ budgets.

Additionally, with a survey cutoff date of December 16, the entire impact of the Omicron variant was still likely not captured in the initial December release. The path of the variant will also likely emerge as a key indicator of consumer confidence in the first several months of the new year. Should COVID cases and hospitalizations quickly dissipate, confidence could get a boost. 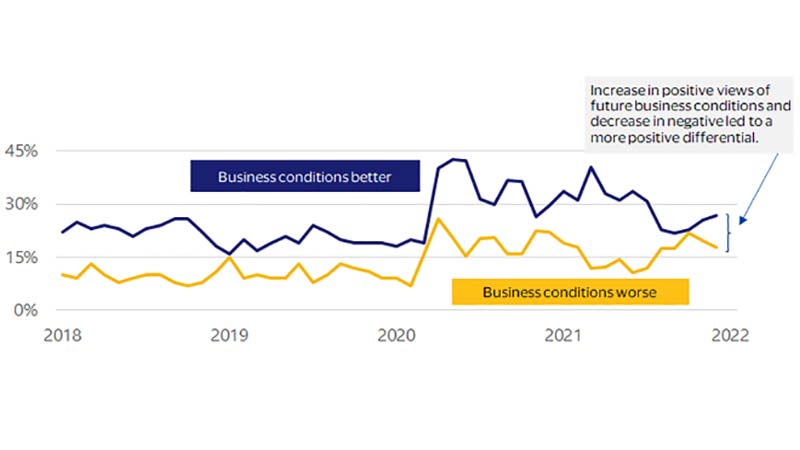 Roughly 50 percent of consumers remain comfortable with the amount of debt they have taken on, but their growing concern in December about debt could result in more conservative spending.

A slightly higher and significant percentage of consumers indicated that they were uncomfortable with their debt levels, reaching 28 percent in mid-December according to recent consumer survey data from CivicScience.

Even with these concerns, consumers expected their debt to be either somewhat or significantly lower in six months. Consumers believed that their debt, although concerning, was relatively manageable. Roughly half indicated they expected their debt to decrease in the coming months, with only 19 percent expecting their level of debt to rise.

Consumers less comfortable with debt levels (How do you feel about the level of debt you have today?) 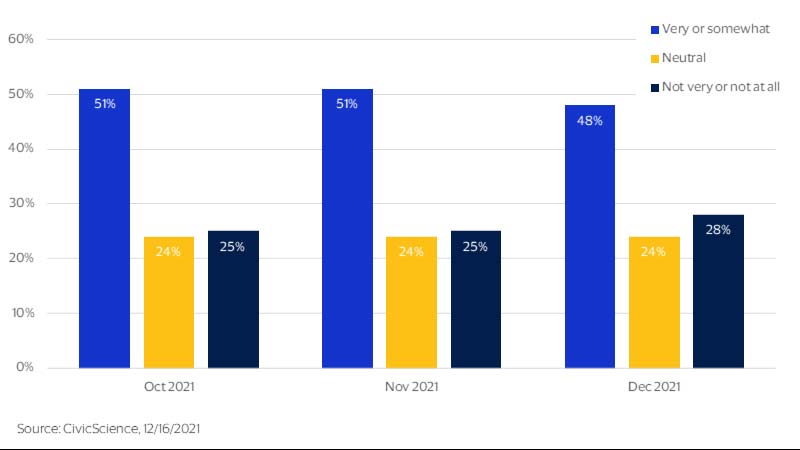 Why consumers choose not to fly

Covid concerns are not the only reason consumers may delay their return to the skies.

Nearly one-third of consumers indicated that COVID was still the reason they were reluctant to travel, but economic and supply chain issues, as well as “pandemic-era behavior” were also factors. More than one quarter of consumers said that flights were too expensive, and more than 20 percent cited either flight delays/cancellations (generally caused by airline labor shortages), or confrontations on airplanes as the reasons they stay on the ground. Airlines must deal with each of these issues—albeit with different causes—for some level of normality to return to travel in 2022. See the table on the next page for a more detailed look.

COVID tops reasons for consumers not flying (Why are you reluctant to travel by airplane right now, asked of typical airplane travelers?) 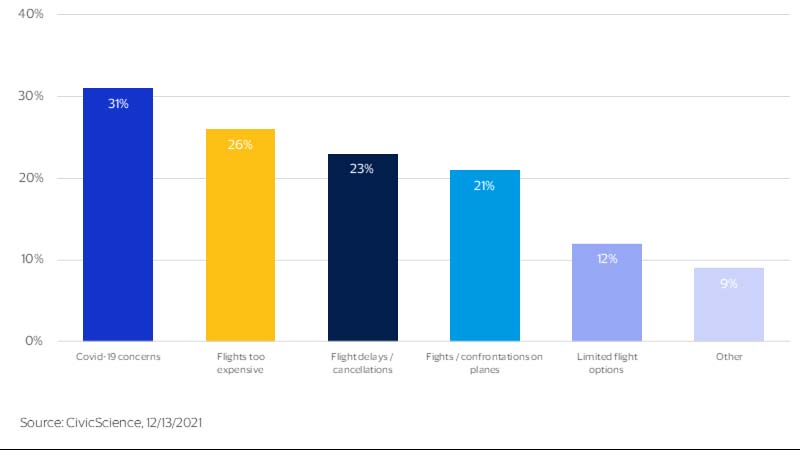 Column chart showing 31% of consumers say they are reluctant to travel by plane due to Covid concerns, while 26% believe flights are too expensive, 23% cite flight delays or cancellations, 21% cite fights or confrontations on planes, 12% cite limited flight options, and 9% cite “other” reasons.

For more information, please visit us at visa.com/EconomicInsights or at [email protected].