Demand for travel related consumer spending is back

The turnaround in domestic travel spending has been impressive but a full recovery likely lies with the ability of travelers to access international markets.

August 6, 2021 – After plunging more than 60 percent at the onset of the pandemic, demand for travel related consumer spending is back.¹ While the COVID-19 global pandemic had a dramatic negative affect on overall consumer spending, the travel sector was especially hard hit by the downturn. In 2019, travel contributed 2.9 percent to overall GDP growth, according to the U.S. Bureau of Economic Analysis, equating to $621 billion in value add from the industry.² As vaccination efforts ramped up earlier this year and communities reopened, travel demand accelerated. With the summer travel season in full swing, we look at consumers’ motivation for traveling again and provide an update on the travel industry’s recovery to-date.

Consumers’ willingness to travel domestically has surged, along with spending on travel. In fact, through May of this year, travel-related spending has recovered roughly 84 percent of its pre-pandemic level.³ However, various aspects of travel are bouncing back faster than others, with auto rentals and air travel leading the way. The pronounced rebound in travel is creating some challenges for the industry, with labor and capacity shortages leading to higher prices. A complete travel industry recovery is still going to take some time. For travel spending to fully recover, the next wave of pent-up demand will need to be unleashed from global travel. At least there is some light emerging at the end of the tunnel for the hard-hit travel industry.

As the economic recovery took hold late last year, it was clear that travel was lagging the overall consumer spending recovery. The importance of vaccinations and feeling safe were key hurdles in the return to travel. Additionally, concerns about the economic outlook led some consumers to hold back spending on discretionary travel.

There are signs that major concerns among consumers continue to subside. As of July, our Prosper Analytics survey data indicated that while respondents were concerned about the economy getting worse, their concern was only slightly higher than the pre-pandemic levels.⁴ Consumer confidence as of June also reached its highest level since the onset of the pandemic last year, as consumers’ optimism about both current and future economic growth conditions improved markedly.⁵

Concern remains about contracting COVID-19 while traveling, but some of the pandemic related factors weighing on consumer psychology are beginning to wane. In the July Prosper Analytics survey, among those who indicated they do not have plans to travel, 58 percent cited catching COVID-19 as the primary factor. While still sizable, the share is down sharply from 71 percent in our April survey.⁴

With consumers’ concerns about traveling slowly subsiding, their intent to travel continues to accelerate. As of July, 50.2 percent of consumers indicated they felt comfortable traveling, up from 43 percent in our April survey.⁴ Not only are consumers willing to travel, but they are following through on their desire to travel with greater spending.

Given that some parts of the U.S. were hit harder than others by the pandemic-induced recession, consumers’ desire to travel varied across the U.S. as well. Using data from the Census weekly Pulse Survey, we identified the areas of the U.S. with the greatest share of respondents planning an overnight trip of more than 100 miles, including Wyoming, South Dakota, Utah, Montana and Idaho.⁶ Conversely, Hawaii, New Hampshire, Rhode Island, New Jersey and Maine had among the lowest share of respondents planning a trip.

With consumers feeling comfortable traveling once again, the bigger question is what kind of travel are they spending on? Not all types of travel are rebounding at the same rate. Air travel and amusement parks are recovering the fastest, while package tours and foreign travel remain at just 40 percent and 20 percent of their pre-recession levels, respectively, as of May. 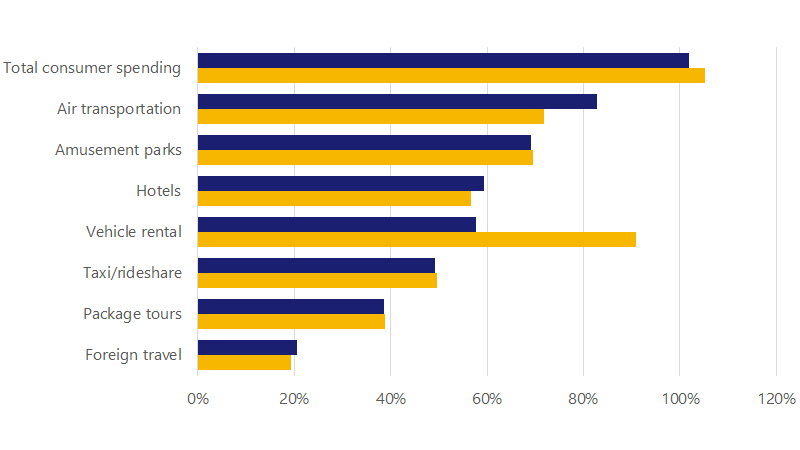 The authors would like to thank Travis Clark and Michael Nevski for their research support.