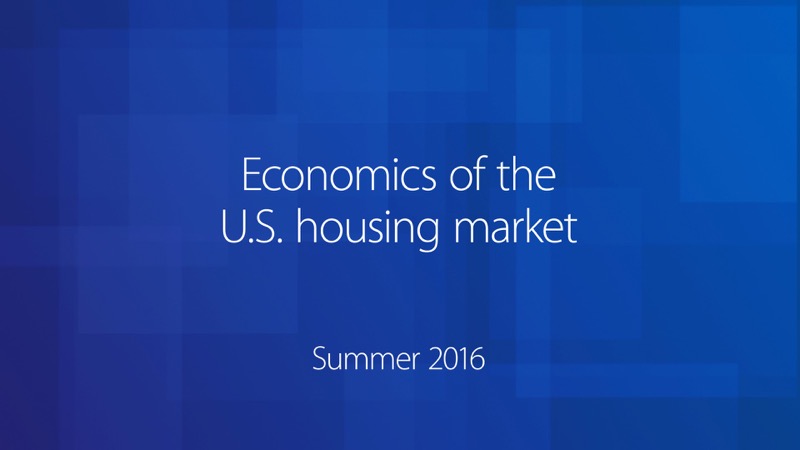 June 30, 2016 - Seven years have passed since the end of the recession, and the U.S. economy remains stable. One measure of the health of the U.S. economy is the housing market, which until recently has been the missing link in the economic recovery. After the recession, consumers remained cautious about forming new households (through marriage, moving out of the family home or other arrangements), and their caution rippled into housing construction and other sectors as well. This trend appeared ready to turn the corner, with employment and wages showing promising signs of growth over the past year.

Although the sluggish April and May job creation numbers tempered this position slightly, the overall outlook remains optimistic. Unemployment is down to pre-recession levels and median wages are up more than 3 percent, and climbing. If the recent drop in job growth proves to be an anomaly, rising employment will help to create the foundation needed for a housing recovery. As more people go back to work and incomes grow, spending should increase and many will consider home ownership for the first time.

Household formation, while on a slightly downward trend this year, has consistently outpaced the supply of new homes since the Great Depression. The gap is slowly narrowing. As household formation improves with job growth, this will stimulate new demand for housing and put upward pressure on prices. New homes will be built, which creates even more jobs and strengthens the economy. This economic cycle of housing, employment and wages should continue to improve in unison—a positive sign for consumer finances and continued spending growth in the years ahead.

After the 2007-2009 housing bust, home prices nationwide fell more than 30 percent, and some areas were hammered with declines of 65 percent or more. The fall-out from the mortgage crisis prompted lenders to become more selective in their lending standards, leaving many Americans unable, or too nervous, to buy a home. Since then, easing credit conditions and strong job growth have helped nationwide home prices to recover to within 8 percent of the peak in April 2016.

As of Q1 2016, 8.0 percent of mortgaged homes were still underwater, yet rising prices are restoring homeowner confidence. Many mortgage holders have refinanced to lock in low interest rates. This reduces monthly mortgage payments and frees up funds for other things. The financial obligations ratio, which measures the consumer’s debt obligations that they have to pay relative to their income, is near all-time lows.

Impact of housing on the economy

Housing construction plummeted following the housing bust and the supply of new homes is still not sufficient to meet demand. Household formation is estimated at 1.7 million* units per year, yet only 1.1 million new housing units were constructed in 2015. Builders point to a lack of qualified workers and developed lots—especially near urban areas where people want to live—as well as environmental regulations. *Estimate of Moody's Analytics 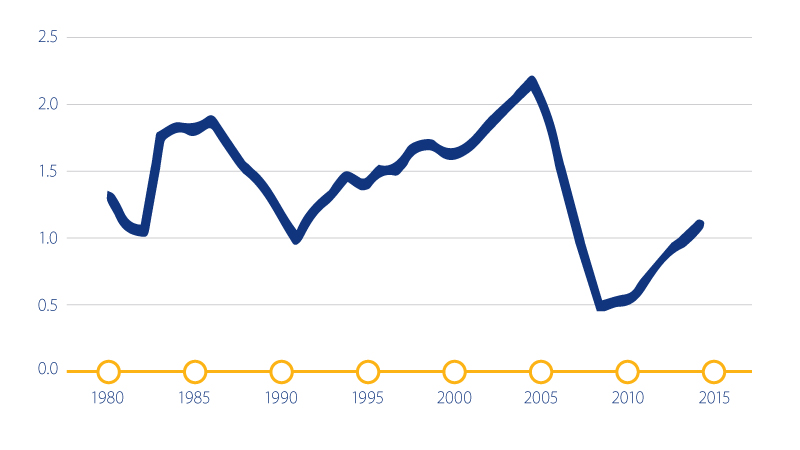 Builder confidence may also be a factor, but appears to be turning around. After dropping to single digit scores on the National Association of Home Builders/Wells Fargo Housing Marketing Index in 2008-2009 (50+ is considered positive), the index is now at 58, indicating builders overall are optimistic about the prospects for healthy 2016 sales. As builders ramp up construction, spillover effects will touch other parts of the economy. For each new single-family home built, an estimated four jobs are created, while multifamily homes generate nearly two additional jobs over one year. This includes construction jobs created directly, as well as jobs created indirectly in other industries related to the home purchase.

The labor market is already tight—there are only 1.4 unemployed people for each of the 5.7 million open jobs. As the labor market tightens further and wages increase, consumers also spend more. In addition, when housing formation picks up, other related areas of consumer spending typically increase as well. According to Visa’s Retail Spending Monitor, building supply, hardware and garden retail sales were up 5.8 percent on average in 2015—these are among the strongest consumer spending categories, while home furnishing sales were also up a healthy 5.3 percent during the same period.

First-time home buyers made up just 32 percent of home purchases in 2015, down from 40 percent historically. The tight supply of homes – especially smaller, more affordable homes—is one of the many challenges facing these buyers. Starter homes accounted for less than one-third of the home inventory in the first quarter of this year. After the recession, builders all but abandoned the entry-level market, favoring the more reliable “move-up” and luxury markets instead as the wealthy consumer segment quickly recovered from the financial crisis. However, demand is shifting to lower-priced options as millennials form their own households and baby boomers downsize from their large family-sized homes.

The tight supply of starter homes is also due to the many smaller homes that were converted into rental properties after the housing bust or were underwater, preventing their owners from moving. First-time home buyers also contend with student loan debt and high rent prices that make it harder for them to save for a down payment or be approved for a mortgage.

However, millennials are reaching their early 30s now, an age when many people typically purchase their first home (average age 31-32). Strong job growth among millennials has consistently trended higher in recent years than other age groups (2.3 percent in May compared with 1.5 percent overall). In the first five months of this year, more than 650,000 millennials have become employed—a major step to moving out of their parents’ homes and bringing more millennials into the housing market. 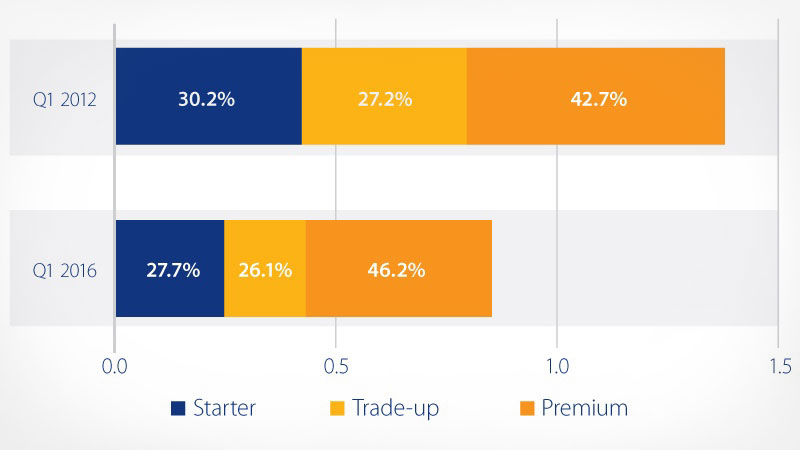 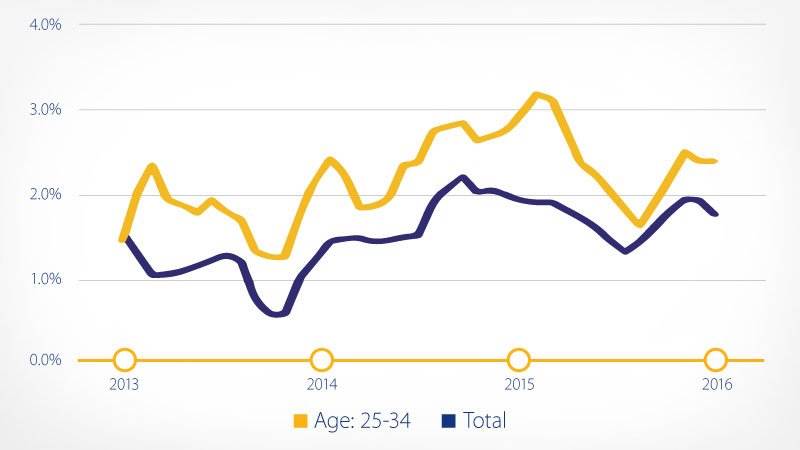 The risk of another housing bubble is possible, but unlikely for now. The increase in home prices is consistent with the current job market, suggesting it is based on a solid macroeconomic foundation. In the U.S., the median home price in 2015 was 3.7 times the median income, indicating homes are moderately unaffordable. The ratio is much higher in some cities—San Jose has the most expensive homes relative to median incomes, with a ratio of 9.7.

As long as wage growth accelerates as expected, the median ratios should fall as home prices become more affordable. However, an economic downturn could lead to trouble in short order. Layoffs in areas with high median price-to-income ratios could create waves regionally. The West Coast could be susceptible to a housing "correction," should a tech bust occur.

Interest rates are also a potential long-term risk. Rates should increase gradually over the next couple of years. The Fed is still expected to take action at least once this year of 25 basis points each time—bringing a return to more normal levels that will cause mortgage rates to increase. Typically, a one percent increase in the mortgage rate adds 10 percent to a homeowner’s mortgage payment. The higher rates could ultimately put pressure on home prices and impact housing demand. This is still a year or two away from becoming a reality.

Despite these risks, the strengthening housing market is a sign of solid economic fundamentals–job growth, rising wages, and household formation. The housing market also adds fuel to the economic recovery as new construction picks up to meet demand. As the economic expansion continues, additional job growth and higher wages will enable new millennial households to play a larger role in the consumer marketplace, leading to greater demand for all types of goods and services.

While the prognosis is still cautiously optimistic, the U.S. economy is well on its way to a sound bill of health.

Best leads Visa's Business + Economic Insight team. As chief economist, he keeps close watch on emerging opportunities in the trillion-dollar payments industry. An active participant in the World Economic Forum’s Global Strategic Foresight Community, he identifies economic trends shaping the future. Best’s presentations and reports explain the impact of these trends to company and client executives, as well as government leaders around the globe.

Before joining Visa in 1990, Best worked as a consultant performing cost benefit analyses for the power industry. In addition to an MBA, Wayne holds a degree in nuclear engineering and has participated in the Stanford University and Kellogg School of Management executive programs.