Can’t fight this feeling of uncertainty.

August 2022 – The short-term outlook is largely positive for all regions of the U.S., but the longer-term view has become far more uncertain. When consumers’ confidence about the future falls considerably below their assessment of present conditions, it signals that economic growth is likely to decelerate. While we do not expect a recession within the next 12 months, we have downgraded our forecast for gross domestic product (GDP) in the second half of 2022 significantly across all regions due to a sharp contraction in residential investment, declining business investment and persistent inflation that will continue to erode real (inflation-adjusted) consumer spending.

The confidence gap between current and future conditions is largest in the Midwest, providing evidence that the region will underperform all others in GDP and consumer spending. Due to labor supply issues, we expect the Midwest to trail the pack in job creation as well. Our expectation that the West would outpace all other regions in terms of Q1 GDP growth turned out to be correct, and that trend has likely continued in Q2 as states like Hawaii and Nevada tapped into the ongoing national travel rebound. Furthermore, the West’s return to pre-pandemic levels of employment in Q2 is a positive sign that the nationwide job market recovery is on pace to be completed in Q3. We anticipate the South’s GDP and consumer spending growth to remain resilient despite having the nation’s highest year-over-year (YoY) inflation rate. Employment growth in the Northeast likely remained strong through the first half of the year and we expect the region to maintain momentum during the second half. 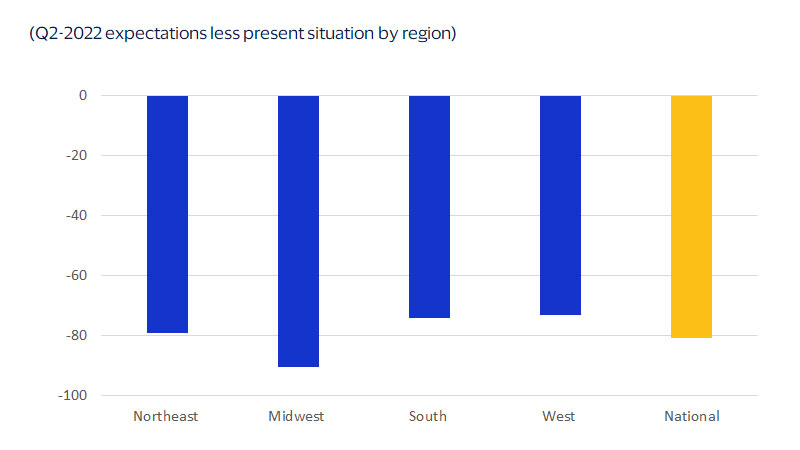 Northeast: Visiting the family back East

GDP growth in the Northeast was strong again in Q1-2022, posting the second highest YoY growth rate among all regions. New England (Connecticut, Maine, Massachusetts, New Hampshire, Rhode Island, Vermont) once again took the lead in the region, with the YoY growth rate trailing only the Pacific division in the West. New England’s strong showing in the leisure and hospitality industry contributed to GDP growth, as spending by out-of-towners boosted incomes for local businesses and workers. Higher tourism was likely a large factor in the Mid-Atlantic (New York, New Jersey, Pennsylvania) as the number of passengers at the international airports in the New York-New Jersey area (JFK, LaGuardia, Newark, and Stewart) surged 171 percent YoY in Q1, according to the New York-New Jersey Port Authority.

Employment growth likely remained strong in Q2, with job gains in both New England and the Mid-Atlantic census divisions concentrated in leisure and hospitality. This, along with sharp increases in passenger traffic in major airports in the region, indicates that the release of pent-up tourism demand is benefitting the region. As a result of strong employment and tourism growth, we expect discretionary spending and GDP growth in the Northeast to remain healthy through the rest of 2022. While we still expect the Northeast to fully recover pre-pandemic levels of employment by Q1-2023, we now anticipate that the New England census division will reach that level earlier, getting there by the end of 2022. Because employment growth is expected to remain strong and YoY inflation rates in the Northeast are lower than any other region, it is likely that the Northeast’s consumer spending growth will outpace all other regions except the West in the second half of 2022 (Figure 3†). While a slowing housing market and high interest rates will certainly impact consumer and business investment in the second half of 2022, we expect robust growth in tourism and consumer spending to keep GDP growth strong in the Northeast. 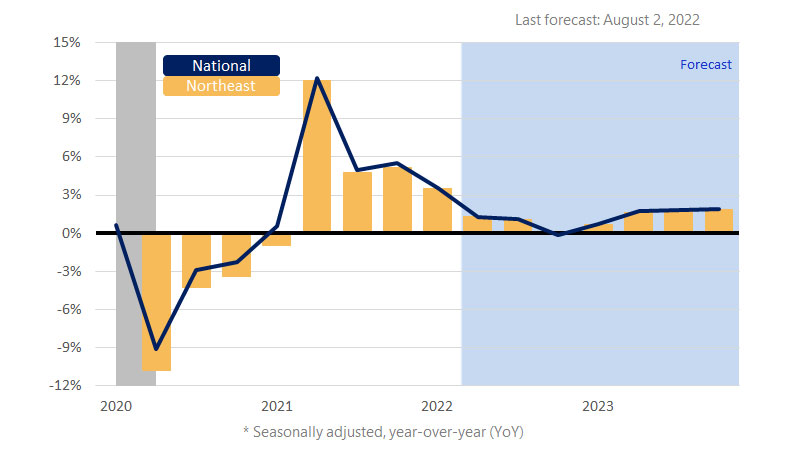 South: Slower, but steady growth ahead

GDP growth in the South remained strong in Q1-2022, trailing only the West. High oil prices continued to boost income in the West South Central subregion (Texas, Louisiana, Oklahoma, Arkansas), giving the division the highest YoY GDP growth in the South. Job growth remained strong in Q1, bringing the region back to its pre-pandemic level of employment. Despite very high inflation across the South, estimated consumer spending also remained strong (Figure 5†), particularly in the West South Central, where the estimated YoY growth rate in nominal consumer spending trailed only New England among all census divisions in the nation.

Our forecasts indicate that the South’s strong employment growth since 2021 is expected to slow. This is due in large part to an expected decline in housing construction, which was a major component of the rise in employment in previous quarters. Additionally, the region has already moved beyond its pre-pandemic peak in employment, leading to very tight labor markets, particularly in the South Atlantic (Delaware, D.C., Florida, Georgia, Maryland, North Carolina, South Carolina, Virginia, West Virginia) and East South Central (Alabama, Kentucky, Mississippi, Tennessee). Supply chain issues have also impacted the region, particularly in the auto industry, and will likely hamper further employment growth in the East South Central subregion and the state of Texas. Furthermore, the large decline in residential investment will have a significant impact on GDP in the South. The South finished the second quarter with the highest YoY inflation rate in the nation. These price increases will likely be a headwind to both consumer spending and GDP growth for the rest of 2022. The good news is that favorable net-migration trends and a business-friendly environment for many states in the South should mitigate some of the impact of these headwinds. 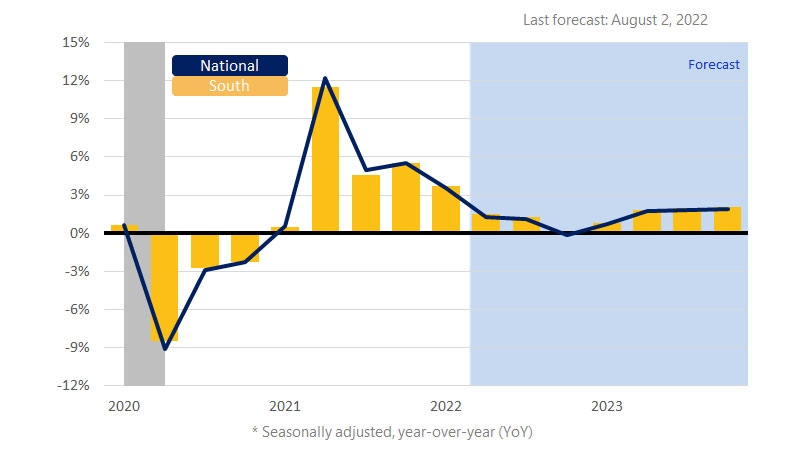 Midwest: Where have all the workers gone?

The Midwest economy continues to lag all major regions of the U.S, with local GDP expanding much slower than the national average. The region’s manufacturing sector is still fighting through supply chain issues that have hampered business opportunities and led to foregone sales, creating a backdrop for mediocre job growth and lackluster spending activity (Figure 7†). The Midwest’s prominent auto manufacturing sector has borne the brunt of these challenges. Consumer demand for cars has been off the charts, but because factories can’t get the parts they need, car makers are struggling to expand and grow. The Midwest is also facing a labor supply issue. Midwest firms are still hiring, but due to persistent outmigration, local firms are struggling to find and retain talent, effectively capping the potential for region-wide job creation. Data on consumer confidence punctuates the broader macroeconomic environment, with consumers reporting much more pessimism in the Midwest than anywhere else.

In Q2-2022, the Midwest economy likely underperformed the U.S. in virtually every major metric. We estimate that GDP growth decelerated sharply alongside slower consumption activity. Over the long term, workforce issues will continue to pose a major challenge, with the labor force outright declining in some states. When the size of the labor force shrinks, it becomes very hard for companies to grow, leading to regional competitiveness issues that can compound upon themselves. High prices for oil and agricultural goods were a tailwind for the Midwest in the first half of 2022, but all signs point to lower prices – and smaller profits – in the second half of the year. If there is a silver lining, it’s job growth. Despite its workforce limitations, the Midwest is still adding jobs at a moderate pace, and a full recovery from the downturn in 2020 could be achieved by Q1-2023. 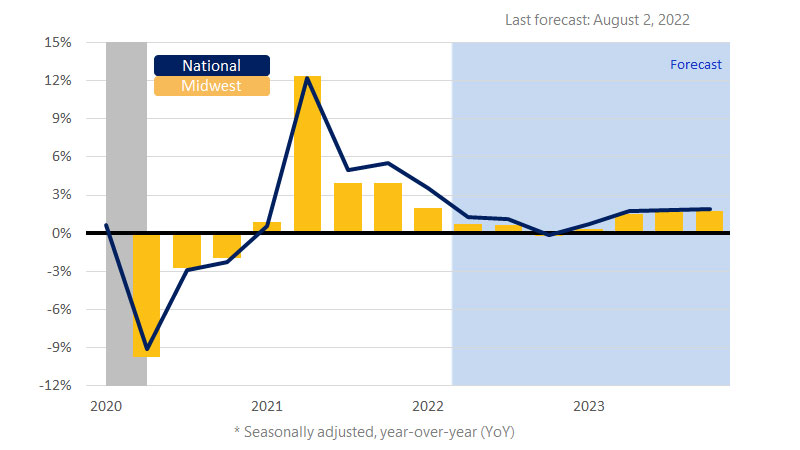 West: Let’s go to the beach

Once again, the West is outpacing all other regions in virtually every major category. The local job market is on fire, with western tourism destinations benefiting from a nationwide travel surge. Nevada and Hawaii are finally roaring back from the lows of the pandemic. Both states derive a ton of economic activity from travel and tourism, and with consumers now looking past COVID risks and unleashing their pent-up demand for travel, they are pouring into Las Vegas casinos and Hawaii beaches, ultimately leading to fierce rates of job growth and GDP expansion. To a lesser extent, California is also participating in the travel rebound. Its economy is large and diverse, so individual industries have a smaller impact on broad-based employment and GDP growth, but California also has one of the largest travel deficits in the nation. California's travel recovery lagged most other states in 2020 and 2021, leaving more upside for tourism activity in 2022.¹

…the West’s return to pre-pandemic levels of employment in Q2 is a positive sign that the nationwide job market recovery is on pace to be completed in Q3.

In Q2-2022, we estimate that the West continued to outperform all other regions in GDP, consumer spending (Figure 9†), and job growth. The Mountain Division (Arizona, Colorado, Idaho, New Mexico, Montana, Utah, Nevada, Wyoming) reached a full labor market recovery at the end of 2021, and we expect the Pacific Division (Alaska, California, Hawaii, Oregon, Washington) to follow in Q3-2022. The travel rebound should continue into Q3 and Q4, as we expect a busy Labor Day weekend and healthy activity during the holiday season. Consumers across the West have become more pessimistic in 2022; however, we expect a turnaround in the region by the end of the year as gas prices come down and the housing market becomes a little more affordable. By 2023, the West could begin to underperform other regions due to out-migration from coastal California and exceptionally tight labor markets in the Mountain Division.

†Chart provided in attached PDF to illustrate this trend.