Global travel out of the doldrums, but how far can it go? 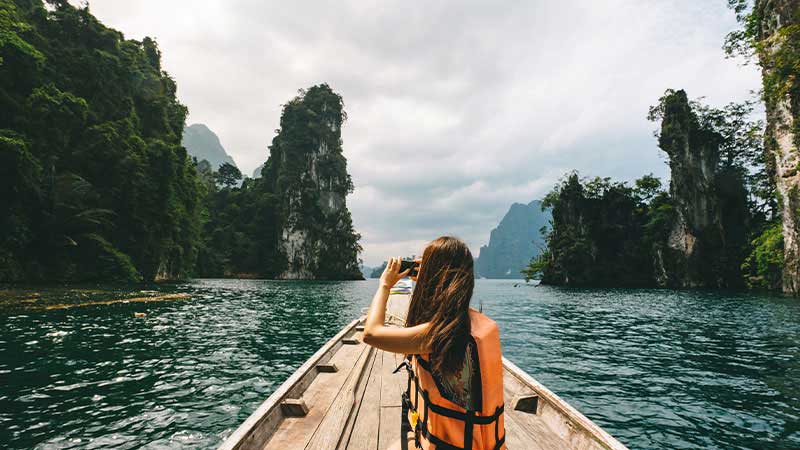 July 2022 – Global travel’s recovery appears to be on an accelerated path forward, with the industry finally leaving the doldrums it was stuck in since early 2020. As of May 2022, cross-border trips globally reached 78 percent of their 2019 levels based on monthly official cross-border arrival data augmented by depersonalized and aggregated transaction data.¹ With long-haul travel (trips of longer than 3,000 miles) now also 71 percent recovered, getting to a full recovery is less about restoring the mix of destinations and more about the strength and openness of source markets.

Pent-up demand and momentum from the current recovery should be enough to sustain a solid summer travel season in the Northern Hemisphere this year. However, rising inflation and slowing economic growth could have an impact, especially on short- and medium-haul travel; less so for long-haul trips.

The recovery will not be complete until outbound travel demand in Asia Pacific returns. Recent arrivals data gives reason to be optimistic that the region should soon begin to close the gap with other regions, especially as more Asia Pacific countries re-open to travel.²

Whether global travel can get back to pre-pandemic trends over the long term depends on the strength and growth of outbound travel from China. Even after its zero-COVID policy ends, China’s ability to return to its prior rates of growth and volumes will be increasingly uncertain, given its rapidly aging population and stressed household financial conditions. 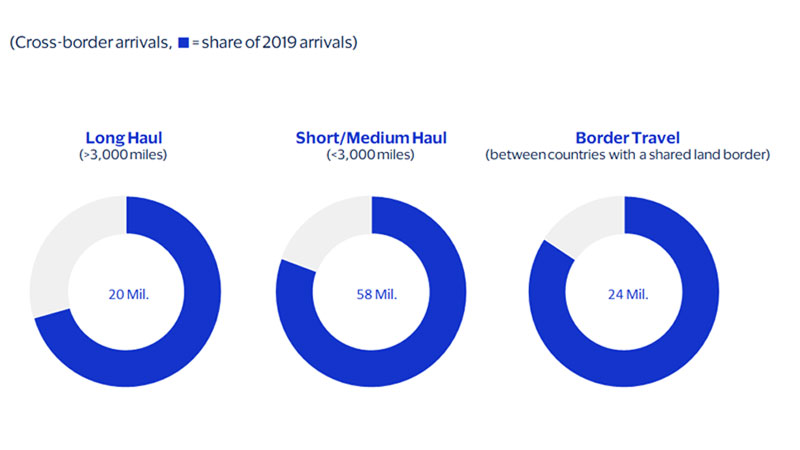 Three pie charts showing the cross-border arrivals by distance travelled in May 2022 relative to May 2019. For long-haul trips (>3,000 miles), travel has recovered by 71 percent (to 20 million cross-border arrivals). Short-haul trips (<3,000 miles) and travel between countries with a shared border has recovered by 81 percent (58 million) and 84 percent (24 million) respectively.

Now well into its peak season (June-September), global travel faces a confluence of challenges: inflation, falling asset prices, war, quarantines and rising uncertainty. Any one of these challenges on its own would have tripped up an ordinary year. Thankfully, given remaining pent-up demand, the momentum behind global outbound travel growth this year has been far from average. Since January, total global outbound travel growth (relative to 2019) has accelerated by 38 percentage points. If not for Russia’s invasion of Ukraine and China’s zero-COVID policy, the recovery would have been even stronger, with a nearly 50 percentage point gain in global travel (excluding China, Russia and Ukraine), and the gap with 2019 essentially closed by May 2022. Except for Asia Pacific, outbound travel was well into its recovery as of May 2022.

A 10 percent increase in oil prices was correlated with a statistically significant 19 percent decline in international visitor arrivals.

Inflation could present the greatest risk to the recovery. Based on our analysis, a 10 percent increase in oil prices was correlated with a statistically significant 19 percent decline in international visitor arrivals. With the increase in fuel prices this year, airfares have risen sharply, putting greater pressure on travel budgets. Surprisingly, this effect was much weaker for long-haul travel, where visitor arrivals fell by 8.8 percent with a 10 percent rise in oil prices. This suggests that either people could find substitutes to short-haul travels such as road trips or that demand for long-haul flights was more price inelastic. By region, the effect was stronger for Europe intra-regional travel, where visitor arrivals within Europe declined by a steeper 24 percent with a 10 percent increase in oil prices. Given that Europe has many low-cost carriers with thin margins, the high oil prices could result in fewer routes and higher airfares, similar to what happened in 2008.

Although the volume of international arrivals from Asia Pacific (AP) has lagged, that appears to be related more to conservative COVID-19 inbound travel restrictions rather than a lack of demand by travelers in the region. While cross-border travel within the region is still stuck well below 2019 levels, outbound travel from Asia Pacific to other regions has recovered at rates similar to other markets. Asia Pacific travel arrivals in global cities such as Dubai, Paris and London have fared much better than their regional peers such as Bangkok, Singapore or Tokyo.

Lifting these restrictions can make a difference. Our analysis indicates that for the top 250 global travel destinations by arrivals in the first quarter of 2019, those that had a ban on travel from all source regions only recovered 27 percent of their 2019 volumes. In contrast, destinations where only a medical screening was applied were able to regain 82 percent of their 2019 volumes over that same time period.

The good news is that with the exception of China, most countries in the region have begun to reduce and even remove their COVID-19 related travel restrictions, which should help to bring back intra-regional travel within Asia Pacific. This should help to accelerate the region’s rebound, as most travel occurs within the region.

The boom in travel to key beach destinations within Asia Pacific underscores what follows when COVID-19 related restrictions are lifted. In the first three months of 2022, Phuket and Bali had already recorded as many intra-regional visitors as half of their recorded visitor numbers in all of 2021.⁴ 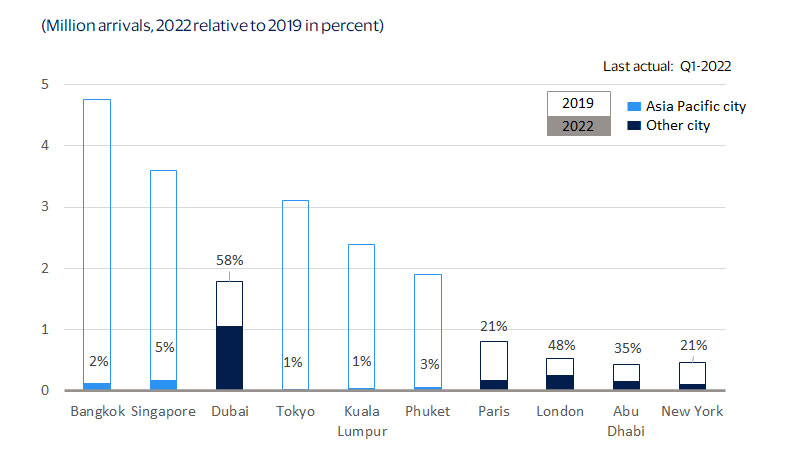 China presents the biggest wild card for the long term

Prior to the pandemic, Visa had forecast global travel to rise over 10 years by 66 million new households traveling internationally to 282 million by 2025, with one in three of those new households coming from China.⁵ Given China’s zero-COVID policy today and associated frequent lockdowns, that prediction now appears unlikely.

Even when China lifts its COVID policies, whether it remains one of the main drivers of long-term growth in global travel and tourism is increasingly uncertain. A rapidly aging population combined with a downshift in economic growth and downward pressure on asset prices could cause the next decade in outbound travel from China to be less robust than many now expect. If the experience of Japan in the 1990s is any indication, China’s outbound travel may possibly have peaked in 2019.

China and Japan have both experienced rapid population aging, with a key difference being that Japan faced this challenge earlier. In 1985, the median age in Japan rose above 35 years, while China crossed a similar threshold in 2010. Aging alone will not necessarily derail rapid growth in outbound travel as both countries in the decade passing this threshold saw similar rates of growth in international departures.

Aging combined with slower economic growth can lead to stagnation in the growth of outbound tourism, as Japan experienced soon after in the 1990s. This was its lost decade when, after decades of rapid industrialization, growth slowed and real estate prices corrected. The old age dependency ratio steadily rose to the point that there are now only two people of working age per person over the age of 65, based on statistics from the World Bank.

In terms of old age dependency, China is converging with Japan at a faster pace, with five workers per potentially retired person in China today, due in large part to the legacy of the one child policy. Many economists now believe that China’s best years in terms of growth are behind it. The current fall in real estate prices—a significant store of household wealth in China—places additional stress on household finances and tightens Chinese travelers’ budgets for overseas trips.

As Japan’s leisure surveys show, aging plays a role in reducing outbound travel as older households on fixed incomes do not travel as much as those in their prime earning years. The downward shift in international travel participation between 1996 and 2011 also shows that a structural downshift in growth can also lead to much weaker outbound travel demand. Whether China can escape this challenge depends greatly on the country’s long-term growth trajectory.