History doesn’t repeat itself, but it does rhyme.

October 2022 – Psychoanalyst Theodor Reik once remarked, “[I]t has been said that history repeats itself. This is perhaps not quite correct; it merely rhymes.” In the final months of 2022, our analysis has led us to pick up on indicators that certainly seem to rhyme with what happened to the U.S. economy in 2001. Business valuations (especially in the tech sector) grew rapidly after the initial pandemic-induced downturn in 2020, thanks in large part to accommodative monetary policy boosting the stock market. Since then, the stock market has sustained immense losses, with the S&P 500 down by more than 20 percent and the Nasdaq down over 30 percent year-to-date. Additionally, many of these firms have not been profitable and have subsisted on cheap loans enabled by very low interest rates. With inflation sustaining 40-year highs, the Federal Reserve’s commitment to tamping down inflation by raising interest rates is likely to heavily impact these and other businesses.

Like the 2001 recession (figure below), it is likely that manufacturing and information (tech) will be the most heavily impacted should a recession materialize in 2023. However, unlike the 2001 recession, we do not expect the negative impact on professional and business services to be as large. The Midwest and West will likely be hardest hit by a downturn in the economy due to their heavy concentrations in manufacturing and tech. Unlike 2001, we expect a long and deep downturn in housing, which will likely disproportionately impact the West and parts of the South. On the other hand, the fact that government, education and health services, and other services could be the least impacted bodes well for the Northeast and South. Also, unlike 2001, oil prices will be a boost to the energy sectors in the South and Midwest. While gross domestic product (GDP), nominal personal consumption expenditure (NPCE), and employment growth should remain strong for the remainder of 2022, the outlook for 2023 is considerably weaker.

Bar chart showing job growth in selected industries during the 2001 recession. Employment declined by 7 percent in manufacturing, 5 percent in information, and 4 percent in professional and business services. Employment increased by 2 percent in government, 2 percent in other services, and 3 percent in education and health services.

The Northeast led all other regions in GDP growth in the second quarter, thanks mainly to strength in the Mid-Atlantic (New York, New Jersey, Pennsylvania). The surging tourism that benefitted the Mid-Atlantic in Q2 continued into Q3, with total flights up 49.2 percent in July and 48.7 percent in August year-over-year (YoY) at New York-New Jersey area international airports (JFK, LaGuardia, Newark, and Stewart), according to the New York-New Jersey Port Authority. The upswing in tourism will likely boost employment growth in the second half of this year. The high concentration of education and health services employment and output in the Mid-Atlantic and New England (Connecticut, Maine, Massachusetts, New Hampshire, Rhode Island, Vermont) likely benefitted from students returning to in-person classes in August and September. We expect tourism and education to be major boons to employment, consumer spending and GDP growth for the Northeast in the fourth quarter as well.

The expected slowdown of the economy in the first quarter of 2023 is likely going to have a mild impact on the education and health services sector, which is very good news for the Northeast. While some tech-heavy states like New York and Massachusetts will likely suffer meaningful job losses, we expect only modest employment and consumer spending impacts to the rest of the region. University enrollment has been found to be countercyclical with the business cycle, with every 1 percent increase in the unemployment rate associated with a 2 percent rise in college enrollment, according to analysis by economists Harris Dellas and Plutarchos Sakellaris. As enrollment rises, university employee headcounts also tend to increase, which could help to mitigate the impact of job losses in other sectors of the economy. While harder times are certainly in store for the Northeast, the recession’s relatively modest employment and consumer spending impacts (Figure 3†) will limit the region’s GDP contraction to a single quarter (Q3-2023).

Global oil and natural gas prices declined in the second quarter of the year, likely reducing GDP growth in the West South Central Division (Texas, Louisiana, Oklahoma, Arkansas). However, a rush of tourism across the South largely made up for that drop, with the South trailing only the Northeast in GDP growth. GDP growth in the South Atlantic Division (Delaware, D.C., Florida, Georgia, Maryland, North Carolina, South Carolina, Virginia, West Virginia) was particularly strong in Q2 with the popularity of spots in Florida, Georgia, South Carolina and Virginia as summer vacation destinations for travelers. According to data from the Visa International Travel platform (VISIT), the only two cities in the U.S. with an increase in international visitors from Q2-2019 to Q2-2022 were West Palm Beach, FL and Austin, TX. While Hurricane Ian certainly had a strong negative impact on travel at the end of Q3, our analysis suggests that the South will lead the nation in both employment and GDP growth in the second half of 2022, thanks to a strong tourism sector and high demand for oil and gas from Europe.

Compared to other parts of the U.S., the outlook for 2023 is relatively strong for the South despite expected declines in the housing construction and manufacturing sectors (Figure 5†). The housing sector decline will likely impact the South Atlantic and the West South Central the most, while the East South Central (Alabama, Kentucky, Mississippi, Tennessee) will be disproportionately impacted by the decline in auto manufacturing. However, thanks to expectations for higher oil and natural gas prices, along with very strong demand for energy from Europe, the West South Central’s energy industry will provide a boon to the region throughout most of 2023. Additionally, the South has a high concentration of its employment and GDP in the government sector, which is likely to be mostly spared from a 2023 slowdown. That, in addition to favorable net-migration trends and a widespread business-friendly environment, should allow the South to lead the nation in GDP, consumer spending and job growth in 2023. 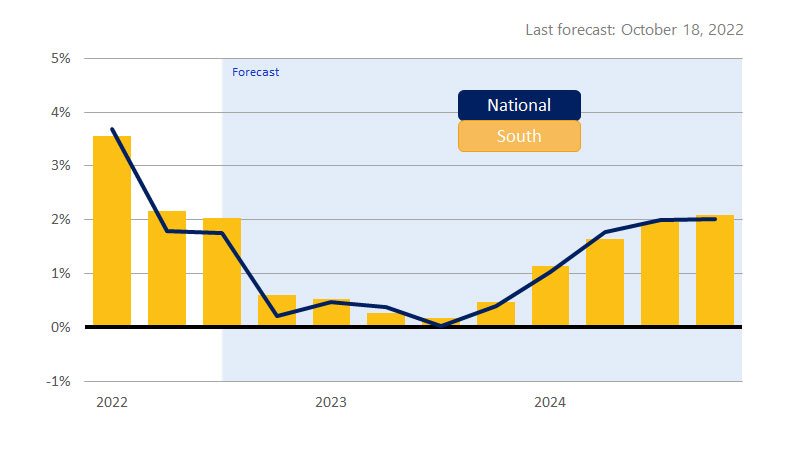 Midwest: Manufacturing under the microscope

The Midwest hasn’t received much rain this year, but its economy is stuck in the mud. Since the onset of the pandemic, its manufacturing sector has struggled under the weight of supply chain disruptions, hamstringing a major engine of economic vibrancy in the East North Central Division (Indiana, Illinois, Michigan, Ohio, Wisconsin). Due to recent declines in the prices of oil and agricultural commodities, the energy and farming sectors have also become sluggish, impacting the West North Central Division (Iowa, Kansas, Minnesota, Missouri, Nebraska, North Dakota, South Dakota). The Midwest’s unemployment rate is below the national average (Minnesota has the lowest unemployment rate in the U.S.), but this is largely because local residents have been reluctant to rejoin the workforce, not because it is experiencing an employment boom (the Midwest is ranked last in job growth too).

We wish the outlook were more positive than the recent trajectory indicates, but the Midwest is expected to bear the brunt of the upcoming recession, should it occur. If history is any guide, the manufacturing sector will experience meaningful losses in output and employment. Americans will buy smaller quantities of goods, as will our international trading partners, and some factory floors will go idle. As a result, consumer spending among local residents will slow more sharply than in other major areas, impacting the retail, food service and hospitality sectors (Figure 7†). The Midwest also has a high concentration of jobs in the corporate headquarters of multinational firms—particularly in Illinois, Ohio and Minnesota. Using the 2001 recession as a guide, there is a real chance that the upcoming downturn will be characterized by corporate layoffs. If such a scenario unfolds (it’s certainly not guaranteed), the Midwest’s job losses and GDP declines could be larger than currently expected.

Through the second quarter of 2022, the West’s economy was still on a tear. The Pacific Division (Alaska, California, Hawaii, Oregon, Washington) led the nation in job creation and NPCE growth, driven by the ongoing recoveries in California and Oregon. These are big states with lots of jobs, and they have yet to return to pre-pandemic employment levels, giving them a tailwind (employment recoveries typically move faster than expansions) that kept region-wide results in an impressive range. Despite higher gas prices, consumer confidence in the West is above the national average. Optimistic consumers typically spend more than their pessimistic neighbors, and this region’s sunny disposition appears to have contributed to elevated rates of consumer spending growth (Figure 9†).

Going forward, the good times are likely to reverse course. If a recession occurs, it will most likely commence in the first quarter of next year. The West is likely to suffer a sharper decline and endure a more prolonged recovery than other regions. The main culprit will be California, which relies on cyclical industries and is not positioned well for this particular downturn. Even through California has a large, diversified economy, its fate still largely rests with the Bay Area tech sector. Technology firms have generated a huge number of jobs in recent years, and these jobs typically pay high wages that provide a major boost to local consumer spending. As a result, each new Bay Area tech job is estimated to create an additional 4.4 jobs across other industries, according to the Bay Area Council Economic Institute. The opposite is true in a downturn, where tech layoffs lead to the destruction of large numbers of other jobs. Some technology companies depend on investment capital and cheap loans to pay their employees, and as investors pull back and interest rates rise, a Bay Area economic reckoning seems more likely by the day.