U.S. Economic Outlook: Finding the signal through the noise

May 8, 2019 – U.S. headline economic growth appeared surprisingly strong in the first quarter, but was inflated by higher inventories and a contraction in import activity. A decline in real final sales to domestic consumers and businesses, the preferred measure of core GDP growth, led to the slowdown in imports and inventory building. Core GDP growth slid to just 1.4 percent in Q1, the softest pace of growth since Q4 2015. Combined trade and inventories added 1.7 percentage points to GDP growth in the first quarter and will likely lead to both categories subtracting from growth in Q2.

Visa’s May U.S. economic forecast points to a deceleration in the pace of GDP growth in the second quarter to 2.5 percent as a slower pace of inventory building and a bounce back in imports shave 0.8 percentage points from headline growth. That said, core GDP growth is expected to rebound in the second quarter as both business investment and consumer spending are likely to be stronger. Nominal consumer spending will likely grow 4.3 percent in 2019. After accounting for inflation, consumer spending will likely downshift slightly to 2.4 percent from last year’s 2.6 percent pace. Business investment should remain modest through the end of the year with business fixed investment expanding 3.8 percent this year from 6.9 percent in 2018.

Highlights of this report: 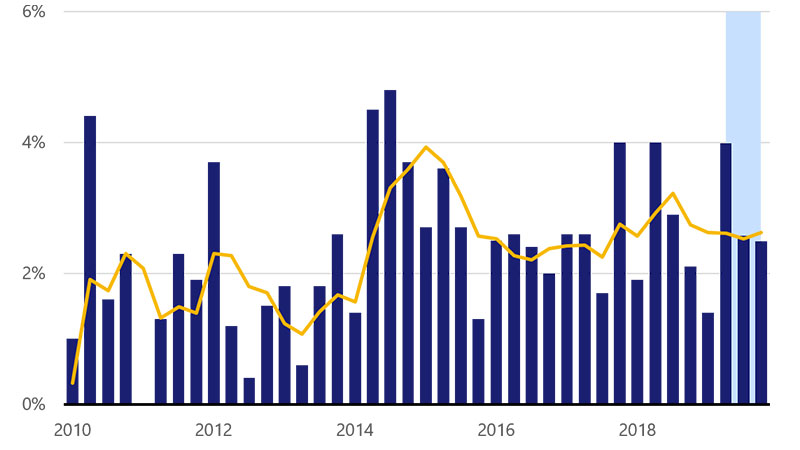