Holiday sales were strong, but consumers have slowed spending due to expired federal stimulus programs and continued surges in COVID cases.

January 27, 2021 – Holiday sales* rose 8.5 percent over last year’s level. Holiday spending is heavily weighted towards goods and also includes e-commerce, both of which drove the gains. Non-store or e-commerce sales slipped in both November and December but remained up 21.3 percent year-over-year (YoY). Among the strongest holiday categories were sporting goods and book stores (+14.9 percent) and grocery and liquor stores (+9.6 percent). Disposable income growth slowed to 4.3 percent YoY in November as stimulus effects began to wane. Government social benefits, which capture unemployment insurance benefits, fell 3.3 percent month-over-month as many individuals began to exhaust their benefits. The recovery in consumer spending remained unequal across spending categories—goods purchases were up 6.9 percent YoY versus services spending, which was down 4.9 percent from a year ago.

Consumer price growth rose 1.4 percent YoY, signifying an acceleration of inflation. Prices for both new and used vehicles increased in December with strong consumer demand. The used car market is especially strong, pushing prices up 10 percent from last year. The Consumer Confidence Index decreased to 88.6 in December, with a precipitous decline of 15.6 points in the present situation component leading the drop in the index. In December, the U.S. economy lost jobs for the first time since the start of the recovery last May, losing 140,000 jobs concentrated primarily in leisure and hospitality (-498,000) and government (-45,000).

“Job growth decelerated each month since June, indicating a tenuous recovery that is relying on external stimulus for support," said Jeffrey Roach, Senior U.S. Economist. “Most concerning is the elevated number of workers who are long-term unemployed, since job skills will diminish during periods without work.” 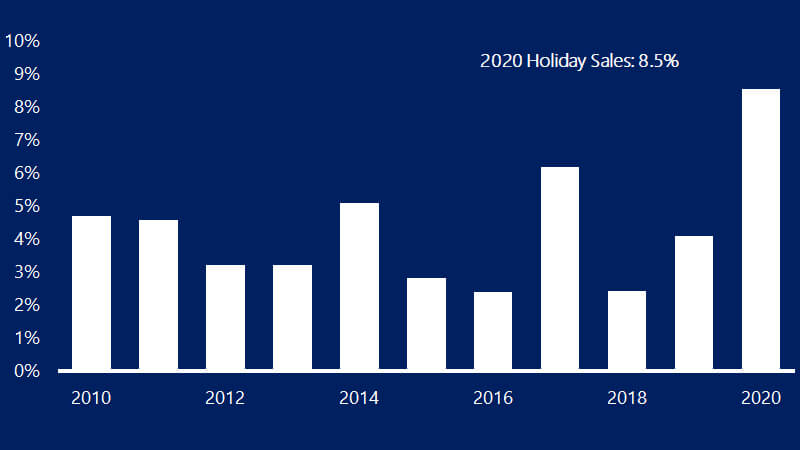 *We define holiday sales as retail sales on all forms of payment less sales at automotive dealers, gas stations and restaurants for the months of November and December.