Is the economic recovery at risk? | Visa

Is the economic recovery at risk?

Economic activity rebounds, even as the number of new virus cases continues to rise to new highs.

July 9, 2020 – Economic data for the month of June continued to signal a rebound in economic activity even as the number of new virus cases continued to rise to new highs. Employers added 4.8 million jobs in June, taking unemployment down to 11.1 percent. The impressive net job growth figures stand in stark contrast to jobless claims, which continue to send misleading signals about the health of the labor market. Elsewhere, data on the business sector is also improving, with the Institute for Supply Management (ISM) non-manufacturing survey reaching a four-month high. As of June, both ISM measures were back above 50, signaling a return to expansion.

Our forecast is little changed since our June update but the downside risks to the outlook are clearly rising. We still see a continued recovery in the months ahead, albeit at a more gradual pace than June’s data would suggest. Our biggest concern remains around the public policy response to the recent surge in COVID cases. Should more wide-spread stay-at-home orders return, there could be considerable downside risk to our forecast. GDP growth is still expected to contract around 30 percent (annualized) in Q2 before growing 10.3 percent in Q3. Overall economic growth for 2020 is now expected to contract by 5.5 percent and rise 1.6 percent in 2021. 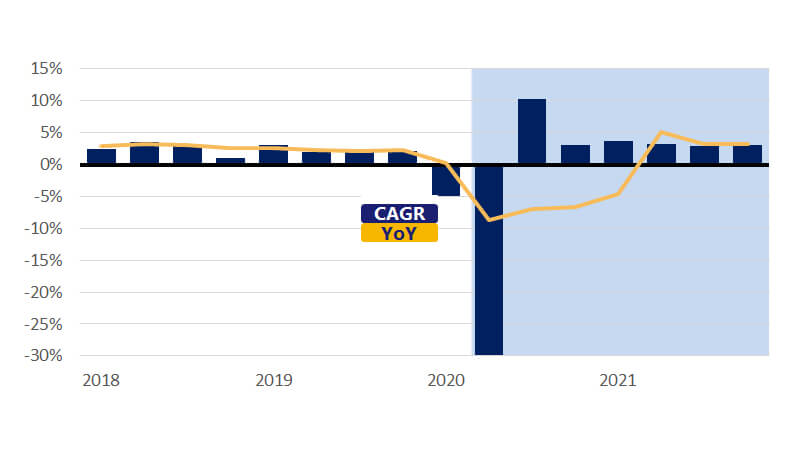 We expect that nominal consumer spending will continue to post improvements in the coming months, but it will take some time to get back to the spending levels of 2019. Another key test will be how much aggregate income is lost once enhanced unemployment insurance (UI) benefits expire at the end of July. While recent job gains have been impressive, it is unlikely that the bounce back in wage and salary growth will be enough to offset the expiration of UI benefits. Nominal consumer spending is expected to contract 5.7 percent in 2020 before rising 4.6 percent in 2021.

Interest rates to aid some sectors

The Federal Reserve is widely expected to keep interest rates low for the foreseeable future as they do their part to help aide the recovery. In addition to keeping short-term interest rates low, the Fed is supporting other markets and keeping longer-term interest rates, such as mortgage rates, low as well. These actions should serve as a tailwind to growth in the coming months as consumers reconsider where they would like to live in a post-COVID world. The low rates should help to fuel further home sales activity and support a rebound in auto sales activity.

Downside risks to the outlook increasing

One of our biggest concerns has begun to materialize: a second wave of COVID infections. The question now is how will state and local government officials respond to surging cases around the country. As of now, it appears that mandatory mask wearing is becoming the de-facto response to fight new infections rather than another round of lock-downs. Should more lock-downs be implemented, there would be considerable downside risk to our outlook. Furthermore, the surge in cases threatens the initial bounce-back in the leisure and hospitality sector and could lead to further layoffs if consumers lose confidence again.