Visa’s analysis of current economic data indicates that U.S. consumer activity continued to recover in July, but at a more moderate pace.

Overall consumer confidence fell 5.7 points from June to July. Confidence in current business and labor market conditions rose 7.5 points, which was the third straight month of increases. However, future expectations fell 14.6 points since June. Confidence fell across all age ranges, and among all household income levels of $50K and above.

In July, the pace of the labor market recovery slowed significantly, with roughly 1.7 million new jobs added. The economy is still down by roughly 12.9 million jobs since February. The unemployment rate fell 0.9 percentage points to 10.2 percent in July. However, the Bureau of Labor Statistics still believes this number is understated due to changes in unemployment insurance requirements.

"A surge in COVID cases in July across a large number of states led to a slowdown in the pace of reopening. The result was a more modest pace of consumer spending," according to Michael Brown, Principal U.S. Economist, Visa Inc. “Services spending on the part of consumers continues to lag the recovery in goods spending.

“Job gains moderated in July as economic activity slowed due to a spike in COVID cases,” said Travis Clark, Associate U.S. Economist, Visa Inc. “This spike also led to a pullback in consumer confidence for the month as consumers became more pessimistic about future economic conditions.” 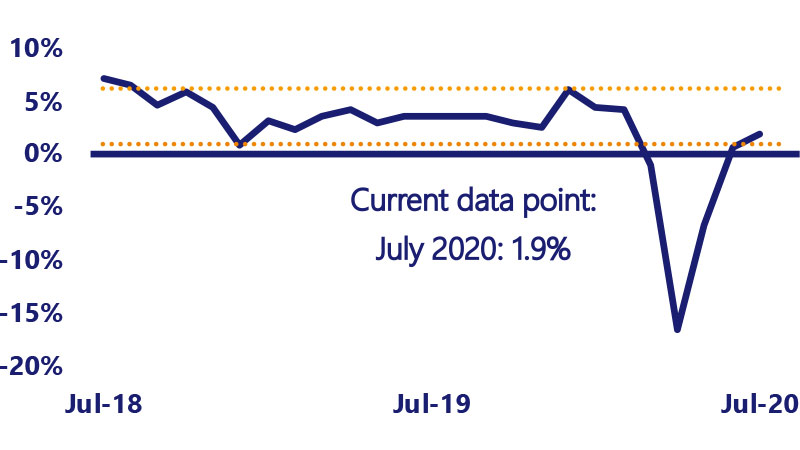 Line chart shows YoY percent change of retail sales (excluding auto sales) from 7.1% in July 2018 and falling to the lowest point in April 2020, reaching -16.64%. After that retail sales began to rise again, increasing to nearly 2% in July 2020.

The orange lines represent the normal range for the prior expansion, defined as one standard deviation above and below the average change from August 2009 to February 2020.

Visa Business and Economic Insights and U.S. Department of Commerce.