June 30, 2021 – Early evidence, leveraging the Visa U.S. Spending Momentum Index (SMI),¹ shows vaccination programs can unleash spending booms, even well before herd-immunity has been reached. Each shot helps clear the path for spending to accelerate, especially among consumers who until recently have remained sheltered.

Expanding beyond the U.S. experience, the potential for consumers worldwide to join the recovery presents a key opportunity. More than one billion people in the world, or one in eight, will soon have received at least one coronavirus vaccine dose at the current pace of inoculation.² Countries with higher vaccination rates have seen a swifter return of consumers to more social forms of consumption, such as restaurants.

Pronounced geographic unevenness distinguished the current economic downturn from prior recessions. Large metro areas, which typically fare well, dragged overall economic and consumer spending growth down as millions retreated to their homes. Vaccination was held as the key to removing the restraints, both voluntary and mandated, on spending by these households.

Vaccination has helped heal gaps opened by the pandemic. This paves the way for a more even recovery, according to U.S. county-level analysis using the SMI economic indicator to gauge upturns and downturns in spending based on the breadth of the spending momentum supporting these trends.

Vaccination as low as 30 percent of the total population appear to unlock previously restrained households, which shows that herd immunity is not needed to restore communities to economic health. Fifty-two percent of U.S. consumers spent more in May of this year than they did in 2019, according to the SMI. In contrast, very few Americans were vaccinated in January, and most consumers were still spending less than they did a year earlier.

At first glance, the data suggests that vaccination does not really add much in terms of spending momentum. After all, those counties that were least vaccinated had stronger spending momentum, both in January and in April, than their counterparts with higher vaccination rates. But this simple reading of the data misses two important points.

First, the gains between May and January in spending momentum were five times stronger³ in U.S. counties where over 40 percent of the population was fully vaccinated than those with less than a 25 percent vaccination rate at the end of May 2021. Vaccination has advanced faster in large urban counties in California, New York and New Jersey—where spending momentum was weaker for most of 2020. In contrast, rural counties in Georgia, Virginia and Texas have been slower to vaccinate and their spending momentum gains have been more modest. In short, the outsized gains in vaccinated regions are currently driving the national recovery more than the less vaccinated areas are.

Second, vaccination clearly has helped speed the economic recovery, once state-level differences are taken into account.⁴ Illinois and Indiana help to illustrate this point. SMI readings for the neighboring states were close to the national average in May. State-level results in May would suggest Illinois—where a larger share of population was fully vaccinated than Indiana (40 percent versus 36 percent)—had not seen any benefit. However, this view does not control for the fact that Indiana’s policies were less restrictive and consumer spending was thus not as affected prior to the vaccine rollout. According to the SMI readings at a county level within states, there is a strong positive correlation in the economic recovery to vaccination rates. Even within Indiana, counties that were able to achieve higher vaccination rates accelerated in spending growth relative to pre-pandemic 2019.

With every 10 percentage-point increase in fully vaccinated people as a share of the total, county-level SMIs rose by 1.4, controlling for state-level differences. This suggests that vaccination rates may have contributed up to 4 percentage points to nominal personal consumption expenditure growth nationally, with a more pronounced affect on spending at restaurants and gasoline stations. 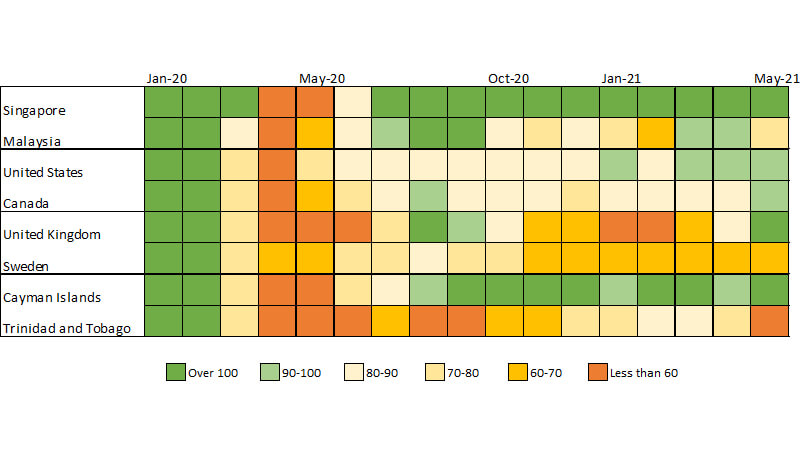 A heat map table showing restaurant transactions per consumer (indexed to 2019=100) from January 2020 to May 2021 for Singapore, Malaysia, the U.S., Canada, the U.K., Sweden, Cayman Islands and Trinidad and Tobago, with dark green representing values over 100, light green representing values of 90-100 and so on down to values less than 60 in dark orange. Across all countries, levels as of January 2020 (pre-pandemic) were in the green range, but as the months progressed to April 2020 and May 2020 they were all in the orange range. Since then, countries have recovered to varying degrees, with Singapore consistently in the green, while Trinidad and Tobago has been mostly in the orange and lighter orange range and has never exceeded a value of 80-90. It is currently at dark orange, while most other countries in the analysis, with the exception of Malaysia and Sweden, are in either the light green (U.S., Canada) or dark green (U.K., Cayman Islands) range.