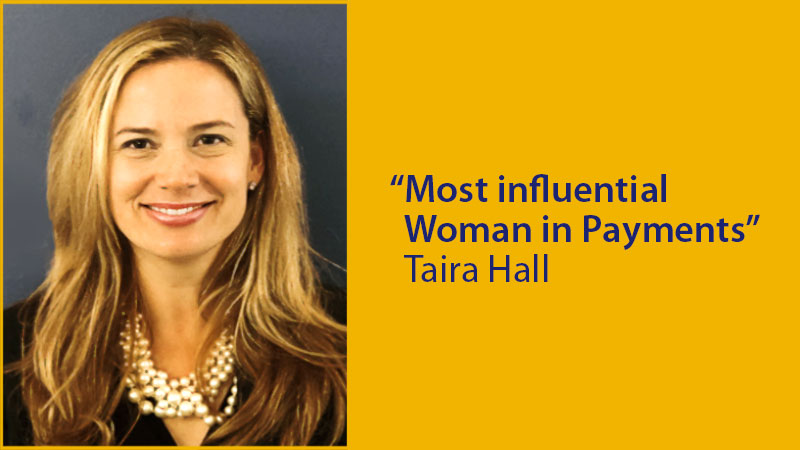 Taira Hall, Visa's vice president of U.S. partnership and new initiatives, was named one of PaymentsSource’s “Most Influential Women in Payments” this week, honored for her accomplishments at Visa, her innovations in the payments space and her ability to act as an outstanding leader and mentor for women across the industry.

Hall's early childhood in Malawi, Africa, was marked by poverty and a lack of financial stability. At the time Malawi was one of the poorest countries in the world. Those experiences ignited her passion for payments that underpinned her successful career in the financial sector. "I witnessed firsthand the adverse impact when there is no standardized financial system, especially on women—the mainstay of that economy," said Hall.

Broadening financial inclusion around the world has remained her guiding principle since joining Visa in 2014. “Payments impact daily lives, regardless of the language you speak or the continent on which you reside,” she said. “The ability to access payment functionality with ease and scale is critical to success for everyone.”

More than two years ago, Hall founded Visa’s B2B Fintech team, a new group in the B2B (business-to-business) space. “While challenging, I recognized it as a white space of opportunity to mobilize new partners and thought leaders,” she said. “By identifying our common challenges, we are able to build new services that disrupt the industry and create a better payment experience for everyone.”

“I consistently find that diverse teams are the best teams,” said Hall. Her strategies for advancing women in their professional careers, in particular, include “ongoing formal and informal mentoring, with special attention to working with women just returning from maternity leave,” said the mother of three. “I also mentor women who have just been promoted, are assuming new roles or who have experienced other major life events that may effect their personal well-being or professional performance.”